... discovering the hot springs via App!

The tour of discovery leads you to hidden hot springs and to the still visible remnants of past spa culture. Meet people from past centuries and let them tell you about their experiences in Aachen. „Granni”, the little goblin who lives in the hot springs, will tell you surprising stories and facts about „his” thermal waters. The geology of the thermal waters and the history of their use come alive on your smartphone or tablet. The app is free of charge.

Deep in the underground, invisible and covered by pavements and buildings, lies Aachen’s hot treasure – the thermomineral springs. They only make themselves felt by a penetrating odour or steam that seeps from manhole covers in the winter. These practically invisible springs are among the hottest and largest thermomineral water reservoirs in central Europe. People have been utilizing the thermal water for 2000 years. Bathing facilities and drinking fountains once shaped the look of the city and were ever present in the day-to-day life of the inhabitants.

The app „aachen 72 grad” answers these and other questions.

The augmented reality app guides you through Aachen’s city centre around the cathedral via 10 stations. The tour takes approximately 1.5 hours. Interruptions are possible at any time. Starting point is the Centre Charlemagne – Neues Stadtmuseum Aachen. Here, on appointment, school classes or large groups can borrow tablets for the
tour.

Technical requirements:
Android 7.0 and up, iOS from 11.0 and up (GPS, compass)
Download is approx. 450 MB via wifi. We recommend fully charging your device or bringing an additional power bank and headphones.

LAST UPDATE (Android 24 February 2022 and iOS 12 March 2022):
With the new versions, the stations of the route can now be visited in any order after starting at the first station (Centre Charlemagne / Katschof).

Frequently asked and worth knowing

Why is the app so big?

The app includes all the content. After having downloaded the app in Wi-Fi you can use the App without internet access. This also includes all the different language versions, audio texts and the route for persons with reduced mobility.

In case of problems

Most oft he features are selfexplaining. Nevertheless it is very advisable to go through the tutorial completely after downloading and starting the app.
Near station 1 or in the city centre, an information window announces that you were not in the city centre and stubbornly sticks to it. Exit app and restart again.

What does the app need?

An augmented reality app has higher requirements for a smartphone. Android smartphones require at least version 7. 0, iOS smartphones at least version 11. 0. Older devices with weaker processors reduce the fun.
The GPS must be switched on for navigation.
Access to the camera is required, in order to see the surroundings and the augmented reality applications. By „collecting the water drops“ the contents of almost all experiences are stored on your smartphone (and only here), so that you can call and view them again at another place outside the route via the drinking glass symbol.
The battery of the device, whether smartphone or tablet, should be fully charged – an additional power bank is also helpful. Headphones allow you to listen undisturbed – but watch out for traffic and other people!

Basically, the route can be taken with your own and suitable smartphone.
School groups and larger groups (15-20 people) can rent tablets through the museum service at the Centre Charlemagne.
Please send your preferred dates to

Route at a glance 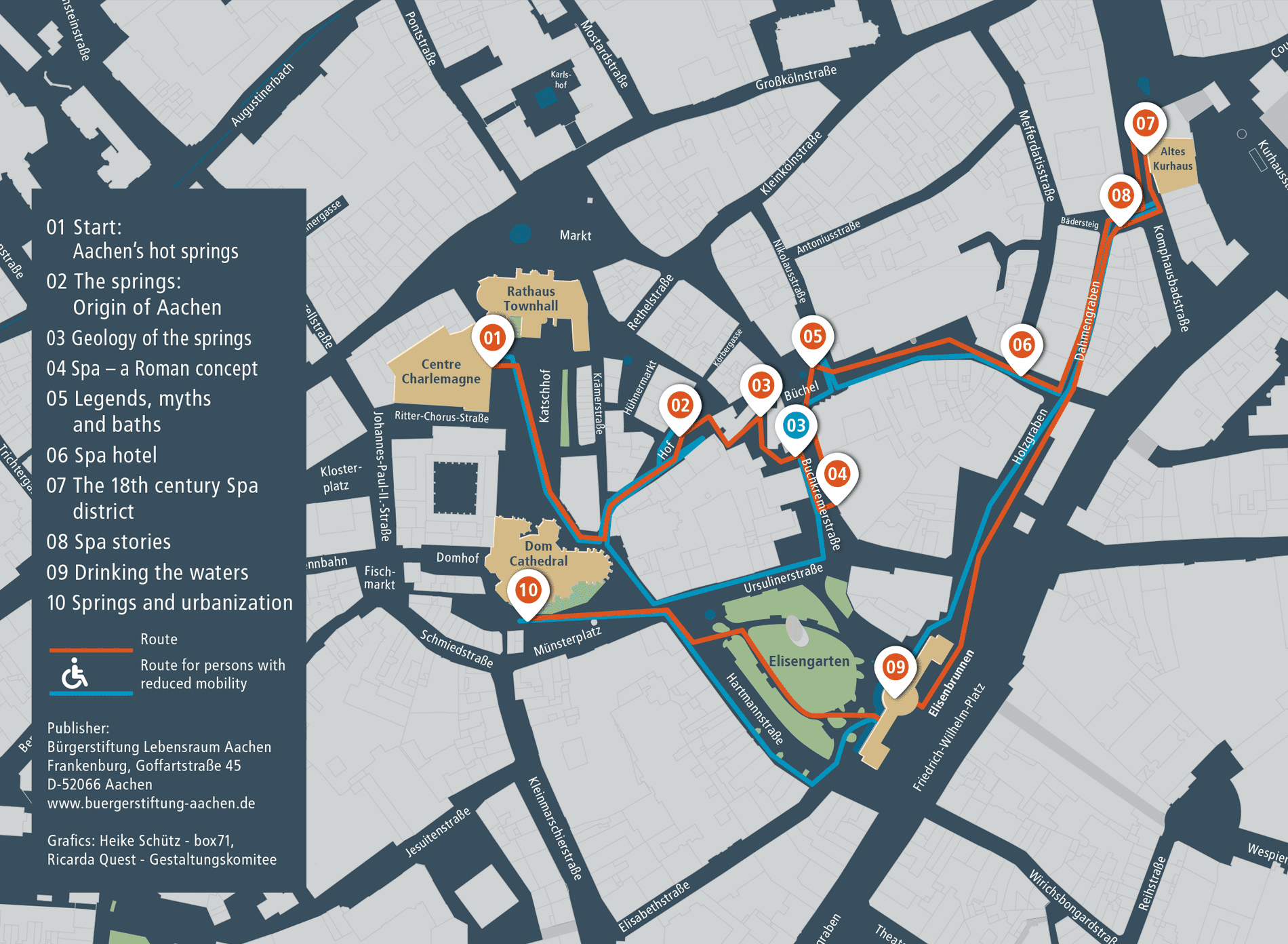